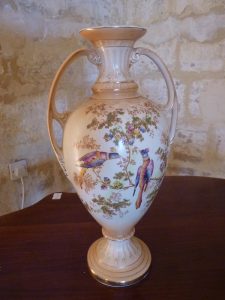 An antique is a collectible item like a piece of art or furniture with high value due to its substantial age. Apart from age, there are other factors usually considered when giving value to the object, including rarity, utility, condition and personal emotional connection. Examples can be found at an antiques shop in Hampshire. In this read, though, we are going to look at the five most expensive antiques in the world.

This is by far the most expensive sold antique on the entire planet. The Pinner Qing Dynasty vase is decorated with gold, sky-blue, and pastel yellow and features four motifs, including flowers and fishes. The vase also features the imperial seal and is said to have been made for Emperor Qianlong. Initially, it was thought to be a replica and was valued at just $1000. However, after revaluation, it was determined to be the original piece and reappraised at $1 million. Also, there were 18 of this kind, but this is the only one and how it made its way from China to London is still unknown.

The Pinner Qing Dynasty vase was exhibited at an auction to be sold back in 2010, and thanks to its history, purity, rarity and beauty, the bidding went overboard and ultimately sold for $80.2 million. The cosigner got a whopping $29 million from the auction.

The second most expensive antique sold in this world is the badminton cabinet designed in Florence in the Medici dynasty era. The piece took 30 skilled craftsmen and a span of 6 years to create. The Badminton Cabinet is decorated with precious stones such as ebony, amethysts, lapis lazuli, and other semi-precious stones. It is considered to be one of the best furniture pieces from France. It is a 12-foot tall piece that also includes a clock with a fleurs-de-lis design for numbers.

The Badminton Cabinet set records twice for the most expensive sale. Back in 1990, it sold for over $16 million and for $36 million in 2004. The magnificent antique piece is currently owned by the Lichenstein Museum and is available for public display.

The codex is a collection of scientific writings made by the renowned Leonardo da Vinci. It is named after the earl of Leicester, who bought the collection back in 1719. The codex is rightly considered to be one of the most significant and popular works of Leonardo da Vinci. Ideally, it is considered to be an elaborate work of science, containing sketches, astronomy musings, theories, the elements, geography and other scientific topics. Everything covered in the book is backed by Leonardo’s signature, further proving its authenticity. The Codex Leicester was bought by Bill Gates at an auction, back in 1994.

This antique was traditionally handcrafted from ivory and decorated with various detailed motifs. It is a fully functioning battle horn designed from an elephant’s tusk and carved with animal motifs in an intricate manner. The animal motifs included in the design include deer, ducks, and rabbits. It went for auction in Scandinavia and sold for $16 million.

Last but not least on this list of most expensive pieces in the antique world is the White Porcelain Moonflask in Pink and Blue Enamel. This piece was made back in the 18th century but features a 15th-century nature and essence. It’s enamelled in white and pink blue and has a distinct Qianlong six-character mark. The mouth of the moonflask is ringed with a ruyi band, and the handles borrow the dragon scroll design. The piece was sold at an auction in Hong Kong for $15.1 million back in 2010.